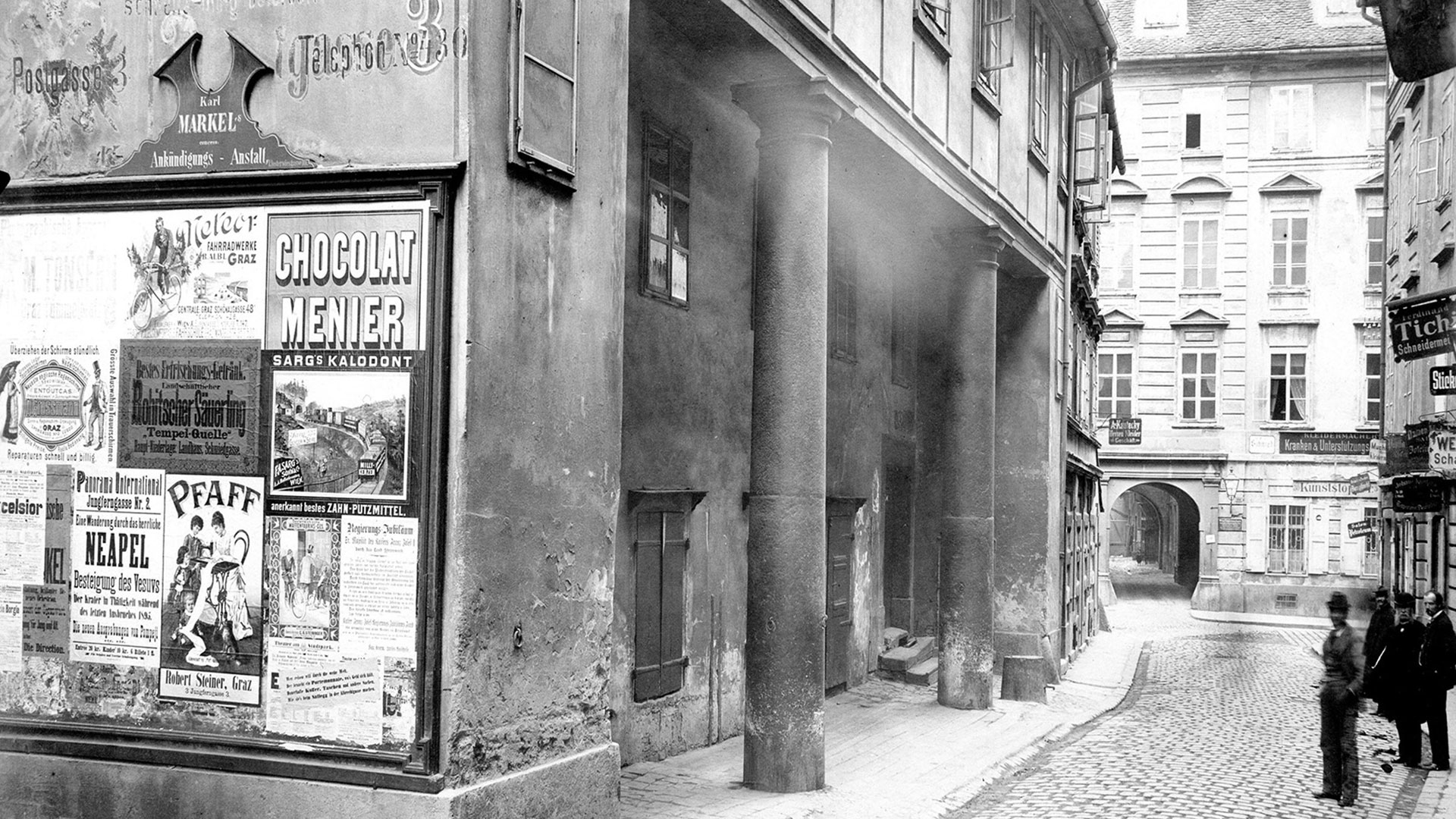 The city is transformation. This has never become as obvious as in the decades before the First World War, when the greatest transformation of the cityscape was undertaken in Graz. Leopold Bude, the most respected professional photographer of that epoch in Graz, took pictures of the buildings destined for demolition and thus created one-of-a-kind documents about the everyday appearance of Graz before the Gründerzeit period. His photographic documentation of the old Ursuline Monastery in the Sackstraße and the row of houses facing the Mur River near today’s Kaiser-Franz-Josef-Kai, or the large botanical Joanneum Gardens near the Eisernes Tor (Iron Gate) alone prove how far-reaching urban renewal was at that time.

Leopold Bude’s photographs are not in the tradition of Biedermeier city vedutas; hence, they are not only beautiful city views. In fact, we can see fragments of a lost world in the medium of photography, which is so permeable for reality. Through their unobstructed views, these photographic images of individual buildings, ensembles and streets shed light on the details of the urban space of a city steeped in history while at the same time rapidly transforming. Vanished Graz is a fascinating offer to rediscover also things of little importance in cultural history in Leopold Bude’s original photographs or to simply lose oneself as a flâneur in the suburban melancholy of the turn of the twentieth century.

Leopold Bude | 1840-1907
Born in Vienna on 13 November 1840 (one year after the ‘invention’ of photography), Leopold Bude initially studied Chemistry at the Imperial and Royal Polytechnic Institute. He might have got in touch for the first time with the new medium of photography via its librarian, Anton Georg Martin, a pioneer of photography in Austria. Then he worked as a photographer in studios in Vienna and Budapest and opened his first own photo studio in the Salzamtsgasse in Graz on 18 May 1862. In 1873, he relocated both home and studio to the house Alleegasse 6 (Girardigasse today); in 1885, he bought the house next door, Alleegasse 8, in order to expand his business. He operated the studio until he passed away in 1907; then his wife Anna, who had already played an active part in the studio before, took it over and ran it until she died in 1913.
Leopold Bude’s work can be considered representative of a professional photographer’s work of that time. The period from about 1860 to 1880 […] is a heyday of portrait photography. Bude had quickly become the most renowned photographer in Graz, not only being very successful as a portrait photographer but also becoming the photographic documentarian of urban renewal and transformation in Graz in the Gründerzeit of the last third of the 19th century.

Excerpt from www.archivundfotografie.at | Author: Dr. Barbara Schaukal | The original version of the text was published in the series “Fotografie des Monats“ within the project “Archiv und Fotografie“ of the Styrian Archive.